Perhaps the tornado that struck Genesee County in May, 1918 should’ve been taken as a warning of the summer to come, given that it coincided with a deadlier storm building “over there” as the Kaiser’s troops smashed through French lines toward Paris.

[Click on articles and images for full view in separate tab]

“Portions of houses, roofs of buildings, garages and trees were gathered up in the mighty storm king’s leash and hurled whole rods from their sites.” 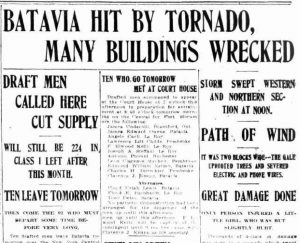 “There came a sudden crash, a noise like a crackling of a mighty fire, then a switch that seemed like the indrawn breath of a giant and that intake of air plucked roofs from houses, windows from their frames, and trees from the earth. People ran out of their homes and stood in the drenching rain because they felt that their homes were unsafe.”

But in that summer’s opening days, no mere tornado could quash Genesee County’s overwhelming enthusiasm for giving the Kaiser what-for. 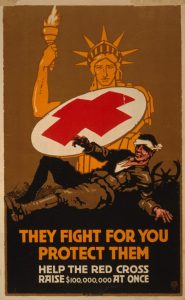 On May 21, thousands thronged to Batavia to watch Genesee County’s kickoff parade to raise donations for the Red Cross War Fund. Thousands more marched in the parade. Automobiles, floats, bands, and masses of marchers  streamed continuously along Batavia’s major streets for nearly an hour.

Bands from every county town accompanied the floats and the footsteps of the marchers. There were massed ranks of social and patriotic organizations, and Polish and Italian societies. Throngs of employees of  businesses and factories created floats and marched too—among them were 300 workers from Massey-Harris, another 300 from  Batavia Steel Products.

“One big float was piled high with shells and surmounted with the caption, ‘Pills for the Kaiser.’  This provoked many a cheer. The same truck carried a cannon which  . . . with the roar of a discharge . . . sent confetti scattering over the heads of the people.” 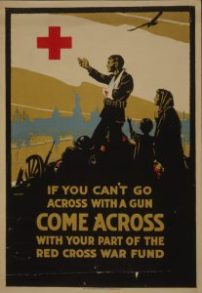 “From the Court House through Main and Jackson streets,” reported the Daily News, “a line of watchers sometimes six and seven deep along the curbs applauded and cheered, doffed caps to the waving flags, dug deep into pockets and flung coins and bills in the huge flags that begged contributions for the wounded boys over there.”

And the parades and rallies and calls to service kept coming.

On May 26, just five days after the huge Red Cross parade, 2,000 county citizens turned out to cheer another group of draftees—97 men, the eighth contingent since last September—as they marched to Batavia’s train station to leave for Camp Dix. 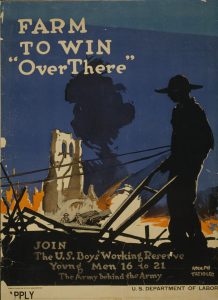 On June 1, a call went out to Genesee 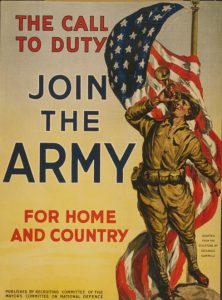 County boys between the ages of 16 and 21 to join the United States Boys Working Reserve, to work on farms in place of the many men who’d left for the war.

On June 5, all males who’d turned 21 in the previous year were required to register for the draft. In Genesee County, 243 men reported, adding that many more to the ranks of those in line for service.

Then three days later, on June 8, amid optimistic news of U.S. Marines pushing back German forces headed for Paris, a total solar eclipse on the scale of 2017’s swept across the United States, darkening the skies over Genesee County from 6:30 to 9:00 p.m.

It was an event that, like the tornado, had no apparent relation to the war, and no immediate effect on Genesee County’s patriotic fervor. But in hindsight, whether foreboding omen or not, it marked a turning point, the beginning of what would become an all-too-regular occurrence over the coming months in Genesee County newspapers.

“A gloom was cast over Batavia yesterday when the news became known that Glenn Shotwell Loomis, son of Mr. and Mrs. Charles R. Loomis of No. 21 Lincoln Avenue, had lost his life in the trenches of France.”

Twenty-three-year-old Marine Private Glenn S. Loomis, Batavia’s first war loss, had been killed in action on June 7—only hours before the eclipse had brought somber skies to Genesee County. 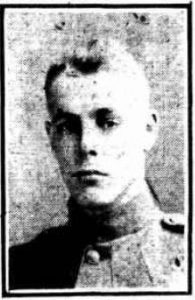 “The young man had written several letters to his parents,” reported the Times. “On March 27 he wrote his parents: ‘I hope to see you before very long, as I don’t believe the war will last much longer.'”

The article continued, “Mr. Loomis was a young man of sterling character, and was highly respected. He possessed a cheerful and winning way, and made friends wherever he went. At one time he was employed as a reporter on the Batavia Times.” 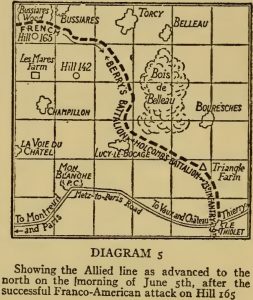 At the end of May, the American 2nd Division, which included the 5th and 6th Marine regiments, was rushed to the area northwest of Chateau-Thierry to halt the enemy’s advance toward Paris. On June 1 the division took up positions west and south of Belleau Wood, where several German divisions had taken the adjacent villages of Belleau, Bouresches, and Torcy and had set up strong machine-gun emplacements in the woods and on surrounding high ground.

For five days the division held its ground against German attacks, stopping the advance.

Then, on June 6, the 5th Marines’ 1st Battalion, which included Glenn Loomis’s 17th Company,  launched the Americans’ first offensive attack in what would become a grueling, bloody, nearly month-long series of attacks and German counterattacks.

Sweeping north from its position near Champillon west of Belleau Wood against strong machine-gun fire, advancing across a ridge, over an open wheat field, and through woods to take enemy-held high ground, Loomis’s battalion reached its objectives by mid-morning despite heavy losses and dug in, where it fought off repeated German counterattacks. 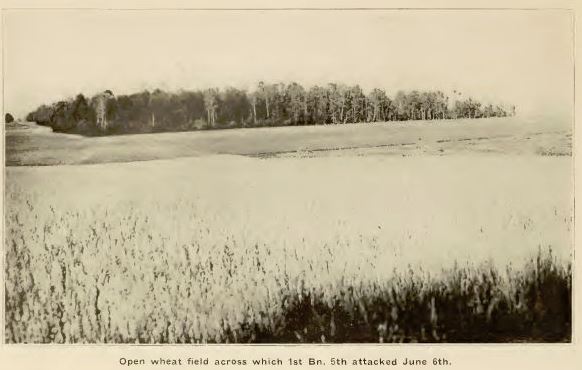 Private Loomis was killed in a counterattack sometime around midnight that evening.

“I had sent him out to warn us of the approach of the enemy,” wrote his platoon commander in a letter to Loomis’s parents. “His last deed was to give us the warning.”

“He cried ‘Boche’ and came tumbling down the hill and fell against a tree. He was stabbed in the back through right side. Bayonet going through chest.” — Sgt. F.A. Seeres 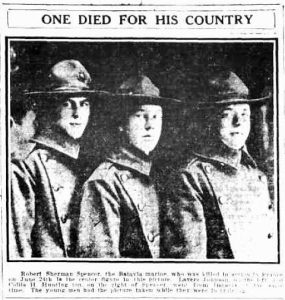 Robert Spencer’s 6th Machine Gun Battalion was in the thick of the fighting, supporting key attacks by both Marine regiments. On the day he was killed, the 6th Marines were attacking north into the center of the woods. Spencer’s 17th Company was providing concentrated fire, despite heavy shelling all day from enemy artillery and minenwerfers (heavy trench mortars).

(Spencer is the center marine in photo, published in the July 12, 1918 Batavia Daily News.)

“The Germans were shelling us heavily and sent over a Minewerfer [sic], a large shell which you can not hear coming, which dropped in his trench killing himself and three others instantly.” — Lt. H.D. Campbell

Spencer’s lieutenant, H.D. Campbell, described the Marine’s death in a letter to Private Spencer’s family, which was published in the July 12, 1918 Batavia Daily News. “It was during the big drive which the marines stopped and after our second attack we were held up by machine gun fire and dug in.” He went on to express his sorrow, adding: “Bobby was my orderly and the most straightforward, big-hearted lad in the company.”

William Bray and Glenn Loomis were classmates at Batavia High School, and graduated together in 1913.  They surely knew one another, and because Bray’s 51st Company had assisted in the June 6 attack in which Loomis was later killed, it is likely that he was aware of his schoolmate’s death as he lined up with his company, five days later, for another assault on Belleau Wood.

At 4:30 in the morning on June 11, under cover of a heavy morning mist, the 5th Marines’ 2nd Battalion moved out across an open wheat field toward the fog-shrouded forest in the distance. William Bray’s 51st Company was on the right of the leading wave.  The Marines made it most of the way across the exposed field before German machine gunners opened up.  Reads History of the Second Division in the World War:

“Once discovered . . . they were brought under fire, and the leading waves shot to pieces, the volume of fire coming from the right front in the angle of the woods.”

By the time the battalion reached the edge of the woods, Bray’s 51st Company had been virtually wiped out. According to one official account, only one officer and 16 men were left.  The battalion as a whole that day lost six officers and 176 men killed or wounded. 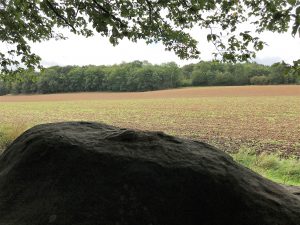 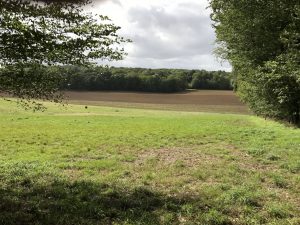 By June 15, after two weeks of repeated attacks and German counterattacks for possession of the woods, the 5th and 6th Marine regiments had taken 2,400 casualties, including at least 567 killed.  To give them much-needed rest, all units were temporarily relieved by the 3rd Division’s 7th Infantry—all, that is, except the 6th Machine Gun Battalion, including Hiram Luhman’s 23rd Company, which was needed to help the 7th Infantry hold the territory the Marines had taken.

Private Luhman was mortally wounded on June 18, just two days before his company was finally relieved. In a letter to Hiram’s parents published in the September 23, 1918 Batavia Daily News, 23rd Company’s Lieutenant H.D. Campbell wrote, “Your son passed through the battle of Bois Belleau and only a few days before we were relieved he was killed in a heavy artillery barrage.”

A  report signed by his company sergeant reads: 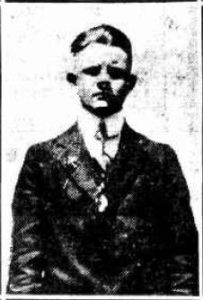 Hiram Luhman had turned 18 less than two months before he was killed. He was one of the earliest Genesee County soldiers to enlist—barely three weeks after the U..S. had entered the war, and just one day after his 17th birthday.

“When he left Oakfield, the same day he enlisted, the Oakfield High School students escorted him to the train,” reported the July 13, 1918 Batavia Daily News. “School was dismissed for an hour and the students formed in line and, carrying flags, marched to the West Shore station.”

After several days of much-needed food and rest, the Marine 5th and 6th regiments returned  to Belleau Wood and repeatedly attacked remaining enemy positions until, at last, on June 26, the message went out to commanders: “BELLEAU WOODS NOW U.S. MARINE CORPS ENTIRELY.”

There would remain scattered skirmishes and additional casualties, and in July more intense combat by the relieving 26th Division to drive the enemy from the village of Belleau itself and from German strongholds in surrounding territory and towns. The Battle of Belleau Wood had been won, but at horrific cost.

In the one-month battle for possession of a faraway French forest, 665 American Marines had been killed, and another 3,633 wounded. In all, the casualties suffered by the 2nd and 3rd Divisions involved in the fighting totaled nearly 10,000 Americans killed or wounded.

At home in Genesee County, regardless of enthusiastic media reports of Allied victories abroad,  the news of the four local mens’ deaths in June cast a shadow that would lengthen all too painfully over the coming months. Day after day that summer and fall, more sad announcements would appear in local newspapers.

The toll grew. By the end of August, ten more Genesee County men had perished.