With the nation newly at war, the summer of 1917 was a time to line up, sign up, and be counted in Genesee County. June and July brought a state military census, a Liberty Bond drive, home defense enlistments, draft registration and selection . . . and news that Genesee County boys  were among the first to ship out for the war “over there.”

[click on articles/documents for full view in separate tab] 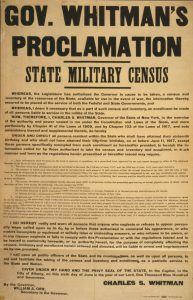 Are you a US citizen? In what country were you born? Are you white or colored (if colored, state black, yellow, brown, or red)?  Do you own an automobile?  Horses? Mules? Rifles? Can you take shorthand. . . make garments . . . do farm work? Can you operate an aeroplane . . . a wireless outfit . . . a steam locomotive?

Mid-June saw hundreds of local volunteer agents, most of them women and many of them suffragists, knocking on Genesee County doors and working at registration booths to help gather information for the state’s “Military Census and Inventory.” Their job: ask every county male and female resident between ages 16 and 50 a battery of questions designed to assess New York’s resources, both human and material, that could be put to military use if needed.

“Persons who fail to comply with the law and refuse to answer questions can be summoned to court. If they refuse to obey they can be sentenced to six months’ imprisonment.” 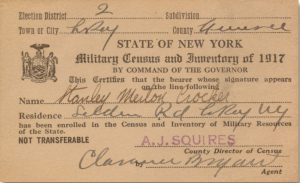 An identification card was issued to each person as proof that he or she had participated in the census. 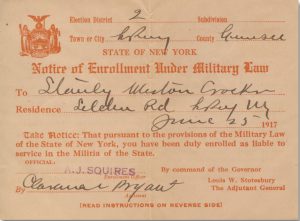 The census also automatically enrolled all male participants ages 18 to 45 in the reserve New York state militia, subject to be called into active service if the governor so deemed. To make that clear, those men received a “Notice of Enrollment Under Military Law” card.

“Now is the time for every man to come to the aid of his County.”

June and July also saw hundreds of males young and old—ages 16 to 64—signing up for Genesee County’s Home Defense regiment. Organized in response to a call by the state Adjutant General for every county to do so, home defense regiments were composed of  volunteer community companies, each with no fewer than three officers, 18 noncoms and 36 privates, to be drilled and trained at least weekly.

Their duty: to “repel invasion, guard strategic points, and preserve order when other forces of the state are engaged in serving their country.”

By September, Genesee County had formed 12 companies—three in Batavia, and one each in Alabama, Oakfield, Elba, Byron, LeRoy, Stafford, Corfu, Darien and Alexander—totaling some 800 volunteers.

Genesee County more than did its part, too, in the Federal Government’s effort to raise two billion dollars for the war effort by selling Liberty Bonds, issued the month before. 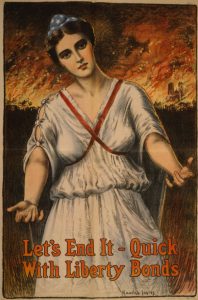 “Nothing will contribute more toward bringing this war to a happy and speedy conclusion than Money Power.” 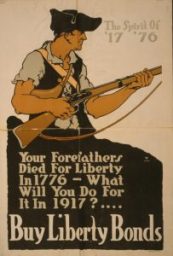 As June 15, the last day the bonds would be available, drew near, communities in the county launched  intensified subscription campaigns, and again citizens responded, lining up at banks and signing pledges distributed by canvassers.

It was the draft, however, that was foremost on the minds of most Americans that summer. 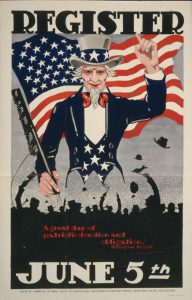 The Selective Service Act, passed by Congress just weeks before, on May 18, required all males between the ages of 21 and 30 to register for the draft on June 5.

With the immediate goal of raising an initial army of 687,000 men within weeks, the Selective Service Act assigned first-draft quotas to each state, county, and large-city district based on its population. New York State’s quota was 69,241. Genesee County’s quota, originally set at 214, then 225, was eventually established: 268 young men would be called.

Upon registration, every draft-age man in the nation had been assigned a number from one to the total number of registrations in his county or district. On July 20, in Washington, DC, numbers were drawn one at a time to determine the order in which men would be called for examination before their local draft boards. 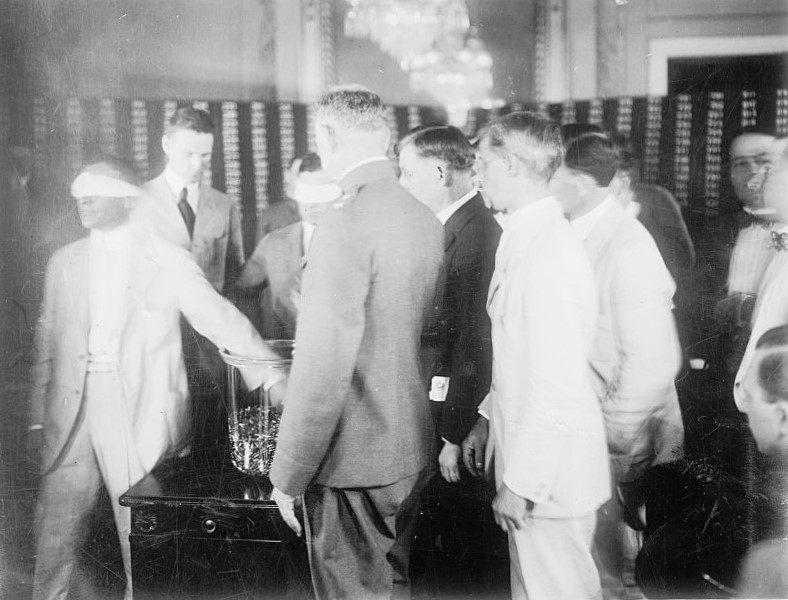 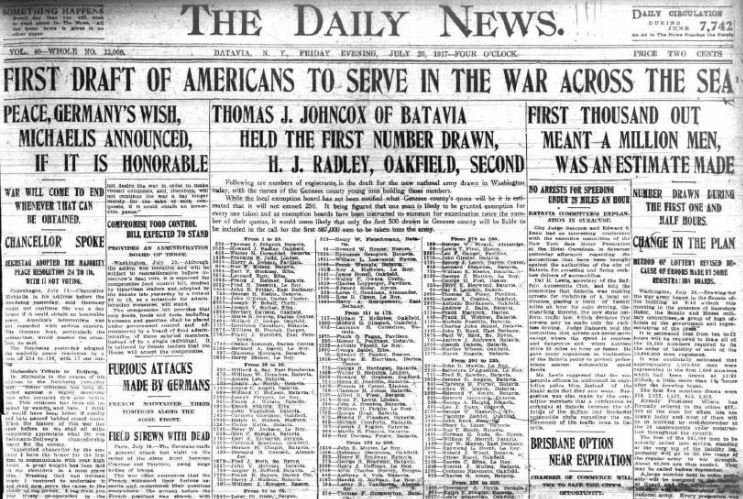 The next day, the Batavia Daily News published a full three-page list of every registered Genesee County man and his place in the order to be called for the draft. 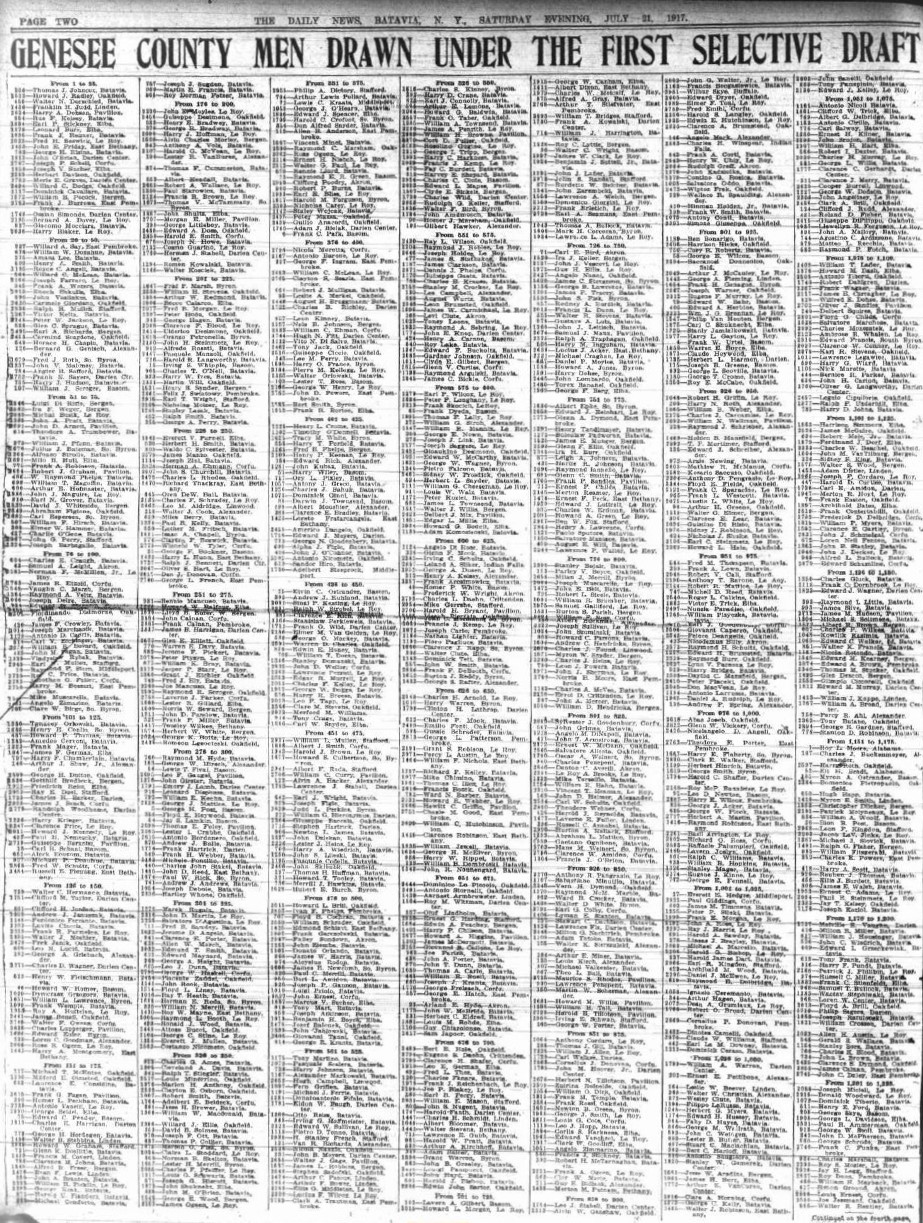 For many, the long list of local names made clear what until then had seemed an abstraction: hundreds of the county’s sons and grandsons, nephews and neighbors, friends and boyfriends, could be sent to fight in a vicious war overseas. And for those whose names appeared nearest the top of the list, particularly the first 500 or so, the call would come soon.

“Genesee County knows today, full well, that Uncle Sam is at war with the Kaiser. Over night distant battlefields have come very, very close to home.” 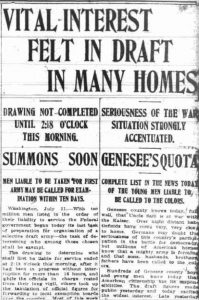 “Hundreds of Genesee County boys and young men know today that American citizenship has its responsibilities.

The draft figures made public yesterday and today excited the greatest interest.

Late yesterday as editions of The News made their appearance . . . papers were purchased with great eagerness and by evening not a newspaper was to be had in the city.  A special late edition . . . was taken by automobile to Stafford, LeRoy, Bergen, South Byron, Byron Center, Elba, Oakfield and East Pembroke. In each town many anxious young men were eager for news.”

Over the following weeks, some 600 county men would be called to appear before the county draft board, made up of County Sheriff Freeman Edgerton, County Clerk Charles B. Pixley, and County Health Officer Dr. Victor M. Rice, who conducted physical examinations.

A few were released for failure to pass the physical. Many, about half, claimed exemptions from the draft allowed by the Selective Service Act for men working in critical industries; clergy; those holding key military, governmental, and judicial positions; and sole supporters of dependents—which at the time included most  married men, and accounted for nearly all county exemption claims. 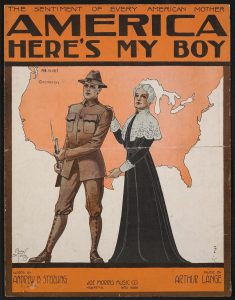 The call and examination of so many men, and the review of numerous exemption cases,  occupied the board for the rest of the summer. But by the end of August, as dictated by the federal draft authorities for every board across the nation, Genesee County had selected the first 45 percent of its first quota of draftees–121 men–to be sent to training camp in two groups in September.

On September 5, an advance contingent of 14 county men—the first five percent of the quota, intended to help train those to follow—left Batavia for Camp Dix, New Jersey. Three weeks later, the remaining 40 percent—107 more men—boarded a New York Central to join them. They were the first two of what would become, over the course of the war and additional draft calls, 16 contingents of Genesee County draftees.

The draftees would undergo weeks or months of training before being sent overseas. But news arrived in July that some Genesee County soldiers were already in France. Levere H. Johnson, Collis H. Huntington, and Robert S. Spencer, members of the 5th Marines, had shipped out on June 14 as part of the first convoy of American Expeditionary Forces to leave the U.S. for the war, and landed on June 27.

Sadly, Robert S. Spencer would be one of four Genesee County marines killed in the fighting at Belleau Wood a year later, in June 1918, and would become one of 66 men and one woman on the Genesee County WWI Honor Roll.

So, too, would Dr. Victor M. Rice, the county draft board’s examining physician, who died of influenza and pneumonia at Camp Greenleaf, Georgia in October 1918, less than a month after volunteering in answer to a national call for army physicians to help stem a deadly flu pandemic.