A continuing series of observations and accounts of
Genesee County, New York during World War I. 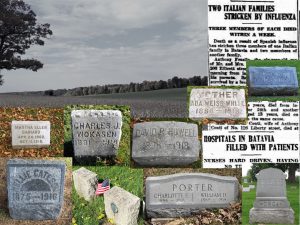 The invisible enemy that invaded Genesee County in the fall of  1918 took 159 lives in seven weeks—and still more in coming months. It knew no discrimination, no social boundaries, no mercy, no pity. 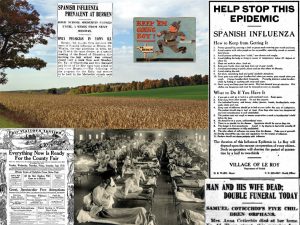 Looking back in local newspapers through the lens of hindsight, you can see it coming: a deadly wave, at first so far on the horizon it must have seemed barely worth noting, but each day coming closer to Genesee County. 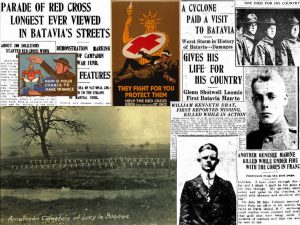 Parades, a Tornado, an Eclipse—and in a Distant Wood Called Belleau, a Sad Summer Begins

Perhaps May’s tornado and June’s  dark eclipse should’ve been taken as warning signs of the somber summer to come, given that they coincided with deadlier storms “over there,” and a sad series of county soldiers’  deaths. 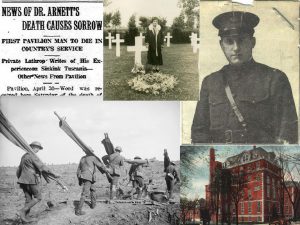 The news that Genesee County received at the end of April 1918 still echoes with sadness today. The popular young doctor from Pavilion had been killed “over there” in France, leaving his new bride and a promising life behind. 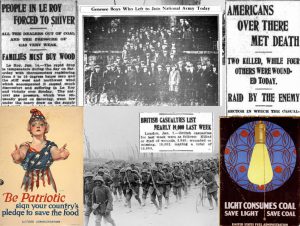 On New Year’s Day morning , the dawn of 1918, the temperature dropped below zero and stayed there for weeks. But it wasn’t just the weather that brought a chill to Genesee County that winter. 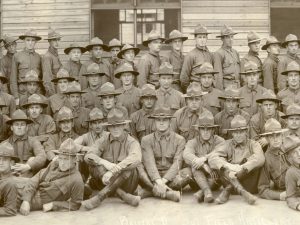 “The Boys of Battery D” — Was Your  Relative Among Them?

In the fall of 1917, Genesee,  Orleans, and Wyoming counties sent off their first WWI draftees.  Most were initially assigned together in the same unit, shown here. Can you help identify them? 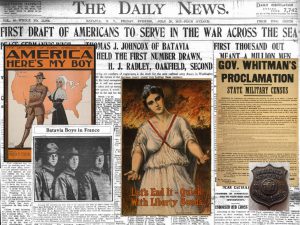 A Census, the Draft—and “Distant Battlefields Come Close to Home”

With the nation newly at war, the summer of 1917 was a time to line up, sign up, and be counted in Genesee County. 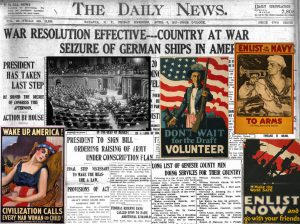 On a Snowy Good Friday, War—and “Months of Fiery Trial and Sacrifice”

On April 6, 1917, Genesee County awoke to a hushed, snow-covered  landscape.  Ordinarily, the word “peace” might have come to mind. But everyone in the county knew that this day, and many months to come, would bring the opposite. 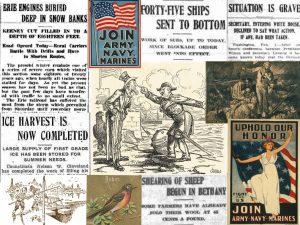 If it hadn’t been for the Kaiser, February and March of 1917 in Genesee County would’ve echoed almost any earlier year’s transition from winter to spring in western New York. 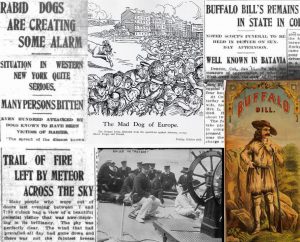 Mad Dogs, Blizzards, A Fireball, Buffalo Bill’s Demise–and “That War Over There”

In hindsight, perhaps they were hints of things soon to come, connections to the coming conflict between county and Kaiser hidden between the lines of the local news in Genesee County in the winter of late 1916 and early 1917.