If it hadn’t been for the Kaiser, February and March of 1917 in Genesee County would’ve echoed almost any earlier year’s transition from winter to spring in western New York.

[Click on articles for full view in separate tab]

“Engines Were Buried All Day in about Eighteen Feet of Snow” 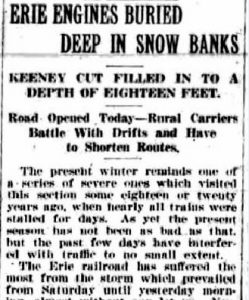 “The storm, which started on Friday night with some snow and a strong north wind, continued almost  unabated until yesterday,” reported the Wednesday, February 7  LeRoy Gazette-News.  “Saturday was one of the worst days here this winter. The temperature in the morning was two to eight degrees  below zero and the wind which blew at a 40-mile clip all day drove the cold into buildings, making it difficult to heat them. On Sunday more snow fell. . . . The wind came up again and continued without let up until yesterday noon.”

“Low Temperature Records for this Winter were Broken this Morning” 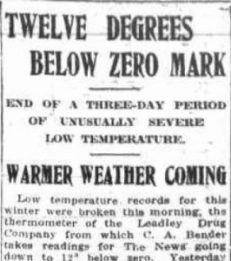 “The high school was not in session this morning, owing to the low temperature in the rooms, although the heating plant was operated to its capacity. . . . Joshua R Houseknecht of the Batavia-Stafford townline road reported that the mercury registered 20 below zero at 5:45 o’clock and it was 18 below at 8 o’clock this morning on his farm.”

But western New Yorkers always have been a hardy lot, not the sort to let a little cold and snow get the best of them, and 1917 was no exception.  “Those who bundled up well and kept moving did not suffer,” observed the Daily News in that February 12 article announcing record cold. 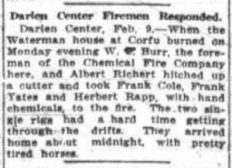 A few days earlier, “When the Waterman house at Corfu burned on Monday evening,” reported the February 9 Batavia Daily News, five firemen at Darien Center gamely hitched up sleighs and headed to the trouble. “The two rigs had a hard time getting through the drifts,” the Daily reported. “They arrived home about midnight, with pretty tired horses.” 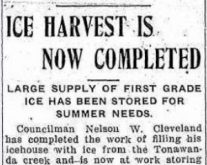 Then too, there is a silver lining in every cloud, or in this case tons of ice in a frigid winter.  “Councilman Nelson W. Cleveland . . . is now at work storing a large shed with about eighty tons of additional ice,” reported the 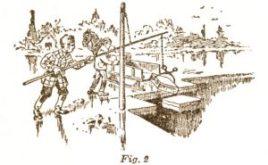 Weather-wise, March came in like a lamb, promising spring soon. Not even a brief snowfall on the 5th dampened the county’s anticipation.

“The snowfall will be of much benefit to the wheat crop, which is reported to be wintering in good condition,” opined a West Bethany correspondent in the March 6 1917 Batavia Daily News. “New seedings and meadows will also be protected from the cold.” 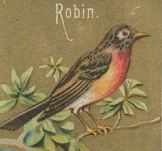 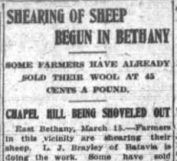 By mid-March, the signs of spring were everywhere.  Robins were spotted in Corfu, LeRoy, and Bergen.  In Bethany, shearing of sheep was begun. In North Byron, reported the March 24 Batavia Daily News, “Charles Searis has tapped his sugar bush.”

Yes, all would’ve been well in Genesee County in 1917 as winter made its welcome exit and spring’s long-awaited renewal arrived, bringing a fresh start, a fresh season. 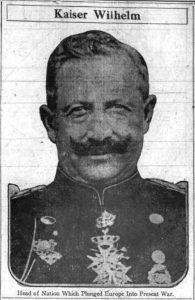 Day after day in February and March of 1917, nature’s cadence from winter toward the edge of spring in Genesee County was overshadowed by a darker sort of  rhythm, a relentless beat orchestrated by the Kaiser and his minions toward the edge of war. 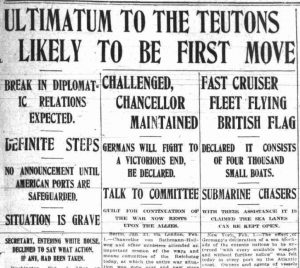 “Germany’s statement means that her submarines have been unleashed for unrestricted operations and henceforth all traffic by sea–neutral or enemy–within a proscribed zone, will be endangered.” 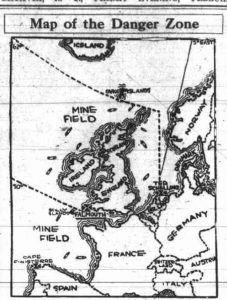 “Tonight or tomorrow the American people may know the course their government has decided upon.”. 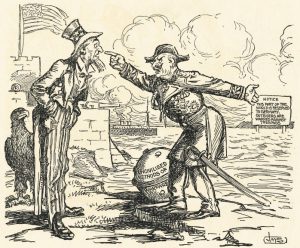 “These Are Days of Anxious Waiting” 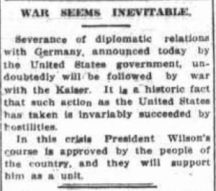 “It is a historic fact that such action as the United States has taken is invariably succeeded by hostilities.” 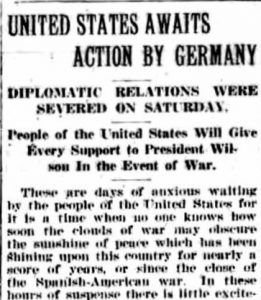 “These are days of anxious waiting for the people of the United States for it is a time when no one knows how soon the clouds of war may obscure the sunshine of peace . . . . In these hours of suspense there is little excitement because the people of this country are looking at the matter with a determined purpose to face whatever may come with courage and confidence.” 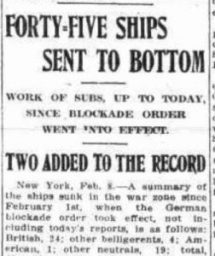 Throughout February and March, hardly a day passed when local newspapers didn’t report at least one more ship sunk, more lives lost. Germany’s strategy:  to cut off food and war supplies to England and its allies, forcing a surrender within six months. 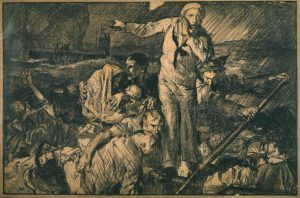 “A Clear Violation of American Rights” 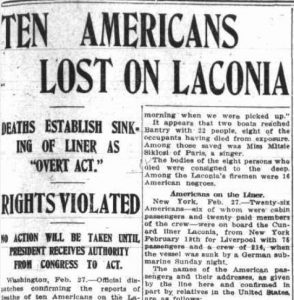 “The first torpedo struck near the stern and when the vessel was struck a second time she listed quickly to starboard.”

“We Shall Make War Together . . . It Is Understood that Mexico Is to Reconquer the Lost Territory in New Mexico, Texas and Arizona.” 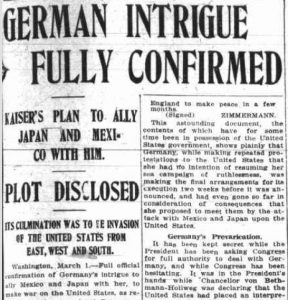 “Revelation of how Germany, expecting war with the United States as the result of her submarine campaign of ruthlessness, plotted to unite Mexico and Japan with her for an attack on the United States has stirred the capital to its depths.”

The telegram from Germany’s foreign minister,  Alfred Zimmermann, to his counterpart in Mexico City was transmitted in code on January 19.  The message was intercepted and decoded by British intelligence, and passed along to the United States. Although neither Mexico nor Japan was found to be complicit in the plan, the telegram provoked outrage throughout the country when it was released to the public on March 1. 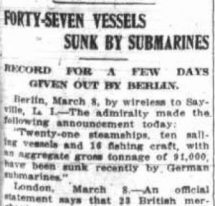 Germany’s  stepped-up campaign of aggressive submarine warfare against  shipping bound for Britain or its allies was clearly taking a toll. Weekly reports such as this one suggested that the admiralty’s effort to cut off food, ammunition, and medical aid was threatening to succeed.

“Guns, Gunners and Ammunition Will Be Placed Aboard American Merchant Ships Immediately” 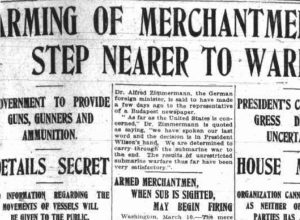 ” . . . they will be sent to sea under orders to fire on German submarines . . . . The mere appearance of a German submarine in the presence of an American armed merchant vessel would entitle that ship . . . to take all measure for protection. . . . ” 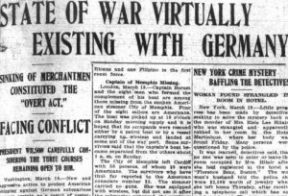 As March wore on, 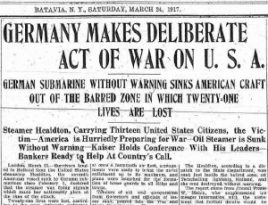 “The Time When Every Man Must Be a Patriot Has Come.”

The nation’s patience was worn thin. There seemed little doubt that the United States would soon be at war. National Guard units such as Buffalo’s 3rd Field Artillery and  74th 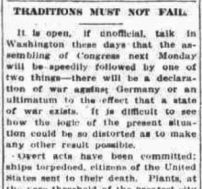 President Wilson would soon address Congress at an emergency special session, called for April 2, regarding “the German situation.”  The nation waited to hear what course of action the President would take. But deep down, nearly everyone in Genesee County, indeed most Americans, already knew.

Next: “Months of fiery trial and sacrifice ahead”